2011 is turning out to be a pretty busy year and I’ve got some updates to mention in just about every area of my life.

It all starts from the same point: we’re having a second little girl later this year. She’s due in mid-August.

I naively thought that two babies wouldn’t be much more work than one. I’m already wrong. 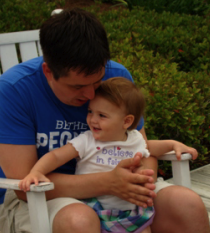 First, my wife is about 50% of my brain correction, people who know us agree my wife is 100% of my brain. She runs the logistics for all our training classes and generally keeps me organized. I’ll probably struggle to put my pants on the correct leg while she’s on maternity leave.

Second, I do have regrets from our first little girl’s 18 months. Around the time of she was born, I agreed to write a Joomla 1.6 book and serve on the Open Source Matters (OSM) board. So, in addition to running two businesses, I quickly added a baby, a book and a board. 80-hour weeks became pretty common. It became quickly clear that I’d badly misunderestimated how long the book would take and how much energy Open Source Matters would absorb.

Things are quieter now. The book is nearly done and we have grown into a much larger team at OSM. Still, I’ve no desire to go backwards and it’s time to start shedding duties so that I’ve more family days.

This year, I’m not going make a lot of conferences I normally attend: no CMSExpo, no JandBeyond, no Joomla Days. Oh, and no DrupalCon London, WordCamp San Francisco or others. In all likelihood, I’ll take a sabbatical from conferences until the end of the year.

I was lucky enough to be elected to OSM alongside several outstanding people. We’re now about little more than 6 months from the end of our terms in February next year. We need to really start focusing on leaving the best possible situation for those who come after us. That includes meeting goals but also:

There’s an American expression, “go hard or go home”. Well, I’ve gone hard for several years. Now, it’s time to go home for while. That starts this afternoon by helping my very pregnant wife chase the little one around the house.

Joomla! Explained and Why Writing a Book is So Hard

Apologies for the Blogging Absence