Recently I’ve seen people talk about the idea that search engines profile websites partly on the script they use. This idea makes some sense to me because it is possible to make reasonable accurate generalisations about some CMS systems:

Do search engines treat your site any differently simply because its built with Joomla?

Earlier this year we ran an SEO test comparing Drupal, Joomla and WordPress head-to-head. In the end we saw no difference in results over 6 months, although WordPress was substantially better at getting indexed more quickly. WordPress is well setup for rapid indexing through its integration with major blog sites and its pinging capabilities, but these can be duplicated on Drupal and Joomla.

Joomla sites should be able to avoid any negative pigeonholing by search engines simply because they aren’t so diverse. Some are photo-heavy, some forum-heavy, some article-heavy and so on. I’m categorizing one Joomla site with others will be nearly as useful as grouping Gallery2, OSCommerce or Pligg sites together (to give just three examples).

Finally, itf you’re going to rely on recycled / duplicate / stolen content, there are much easier platforms to do it with than Joomla.

Hummerbie summed it up very nicely when we posed this question on Monday:

"I have been watching the figures since I removed the Joomla generator strings, but I can not give any conclusions to improved ranking because of this… ultimately it is the content that wins the battle." 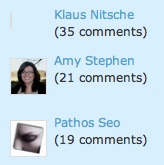