A while ago we blogged about the slow death being suffered by the Open Directory. On October 20th their servers crashed and since then no-one was able to submit sites and editors could not update categories.

Finally, two months later on December 18, the DMOZ staggered back to working order. The questions is, can it recover from those recent terrible months?

Perhaps a better question is, can it recover from the recent terrible years? Want to know how irrelevant the Open Directory has become? Check out this list of websites whose homepages are missing from the site:

Some sites such as Digg.com, Friendster.com and Technorati.com get 2 or 3 mentions but try to find an major blog that you’ve read recently and you’ll be completely out of luck.

The sad truth is that the DMOZ has been completely left behind by the Web 2.0 generation of sites, in terms of its relevance and its technology.

The surprising is that sites such as Alexa.com still rely on it for listings and search results. What can they be thinking?

Well, despite its recent troubles, the traffic patterns for the site don’t reveal any major troubles. The site is still doing better than it was during most of 2004 and 2005: 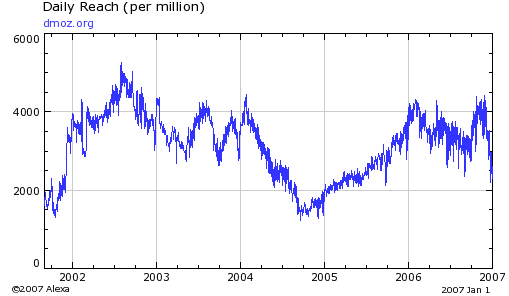 However, it is true that there has been a drop in the last two months. Whether it  can recover from this current drop in traffic will go a long way to determining its long-term health.

OpenSEF Will Be Back