Since we expanded into Drupal and WordPress training quite a few people have asked variations on these questions:

The simple answers are no and no. Last summer we discussed how smart companies were now supporting several CMS platforms and gave some reasons why. I like to think we’re just following our own advice.

I’ve another reason to add … Joomla companies are remarkably dynamic and entrepreneurial. Looking back over the last few years, Joomla has been a remarkable hotbed of innovation, particularly when it comes two areas, business models and design:

One of the WooThemes developers, the biggest themes site in WordPress admitted that took the subscription model from the innovations of Joomla developers:

“We replicated the business model used by both RocketTheme.com & Yootheme.com, as they’d been very successful in the Joomla community and we wanted to bring that to the WordPress community.” Link

If my memory serves me right, MamboSolutions were the first template club and Andy Miller followed with Mambodev (what would later become Rockettheme). Since then 100s of template clubs have sprung up all involved in a monthly arms race that helps them develop new ideas in: 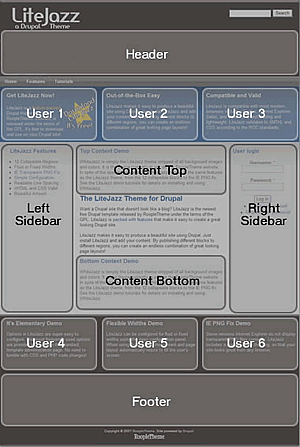 If you look at many Drupal and WordPress templates, they clearly take lessons and ideas from Joomla designs techniques.

Take a look at LiteJazz from Roopletheme and you’ll see not just design ideas from Joomla but even region positions … User1, User2, User3 etc is an odd naming convention and taken directly from Joomla.

Selling extensions under the Commercial GPL and getting customers to pay for support and documentation? A lot of Joomla companies bravely pushed into that area. We interviewed the only 5 commercial GPL developers we could find back in mid-2007. Even several of those 5 were unsure and hesitant about the new model. That same month Daniel from Ninjaforge.com and Vic from Anything-Digital succesfully released their products under the GPL license, paving the way for many more to follow.

That Innovation is Still Continuing

So far we haven’t seen many (any?) companies from other platforms try to release for Joomla. Woothemes may be the first this year many Joomla companies are continuing their innovation and stretching their wings.

Drupal is innovating in it’s own way, expanding into the corporate and government sectors, and WordPress is doing a great job of gaining marketshare for Open Source in many industries.

However, be proud of what Joomla and the people involved with it have achieved. The number of Joomla firms expanding to Drupal, WordPress, Magento, and phpBB3 speaks of Joomla’s strength not its weakness. This is another first from hardworking and entrepreneurial developers who continue to build an industry full of innovation.

No Upgrades? You’ll Scare Your Users Away

The 4 Pillars of Open Source Communities