Probably 50% of the articles and news I read now are on my phone. Morph from Prothemer.com is the first product I’ve seen to produce a really high-quality display of a Joomla site on the iPhone but expect more templates and extensions to follow their lead in 2010.

With the money to be made in Joomla and other CMSs, I’d be shocked if more companies didn’t start accepting and growing with Venture Capital funds. Artisteer is one example of what VC money can do:

The CMS Expo in Chicago is going to be bigger and better than ever this year. There’s also talk of Joomla’s first ever International Event to be held in Germany and for major events on each continent. The SEO and domain name industries each support multiple conferences each year – there’s no reason that the CMS industry can’t do the same.

Increasingly projects such as Drupal, Joomla and WordPress want to approve what is done in their name. I only see that trend growing next year.  For example, Acquia / Drupal is already preparing certification for developers. Expect to see many more of these official seals of approval.

At the moment template frameworks are used entirely within template companies to allow them to churn out complex templates each month. With the release of Morph and the news that Rockettheme’s Gantry is going GPL, the pressure will be on for other design firms to open up thier platforms and encourage other developers to get on board. Frameworks will become similar to APIs … a way to develop ecoystems around your product.

For me, one of the major trends in 2009 was hobby developers finding it increasingly difficult to support their products. sh404SEF, AEC, Community Builder, jFusion and many more hit the Open Source Wall and looked for revenue streams. In 2010 the pressure may be to keep on moving forward. In order to guarantee survival these new businesses will need to keep on growing by diversifying and adding new products.

The “Joomla Template Club” or the “WordPress Theme Designer” will become the minority. By the end of 2010, a clear majority of designers will be producing for more than one platform.

Hee hee! I’m brave, but not that brave …

What are your predictions for the Joomla world in 2010? 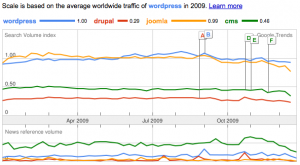