Over the years, we’ve built a lot of WordPress plugins. Recently we’ve experimenting with SaaS platforms for WordPress.

First was Watchful which is a site maintenance service.

Next was Logtivity which is a monitoring service for WordPress agencies.

This month, we’ve launched RoleUp. This a platform to onboard and offboard users from a lot of WordPress sites. You can see a preview of the RoleUp dashboard in the image below:

Logtivity Charts Got Much Better with Chart.js and Date Range Picker

Logtivity is a WordPress activity log that we launched this summer. Not only can you track all the activity on your site, but with Logtivity you can also turn that information into beautiful and useful charts.

We use the charts all the time in our other business. You can use these charts to show logins, purchases, subscriptions, cancellations, downloads, or any other key events.

Logtivity charts just got a lot better because you can customise the date range for charts. Your charts are updated with advanced date ranges, so you can zoom in to view any time period.

Last July, I turned 40. For some people that’s not a huge milestone, but for me it was. I felt stale and in need of fresh challenges.

So from last summer to this summer, I worked on making changes. Some things happened: I bought out my main business partner and made a significant move into WordPress. But, by-and-large, it was a year of slow negotiations, many discussions and lots of tire-kicking. I even sat for my first job interview in 15 years, before realizing that was the wrong direction.

Looking back over the last 18 months, most of the posts on this blog have been about acquisitions. This post has a summary of them all.

I should blog more about other things, but the acquisitions have kept me busy!

Over at Joomlashack, we’ve hit on a business model that is working well.

Oh, and we’ve adopted WordPress plugins too with Bylines and UpStream.

Joomla and WordPress are mature markets and some developers are leaving after 10+ years. We think that adopting code is a win for everyone. In the past, developers had limited options if they wanted to stop work on their extensions. If they made an official announcement, they had to deal with unhappy users. To avoid this, sometimes the developers would just disappear. In contrast, a smooth adoption leads to a great outcome for the developers and users.

I suspect we’ll adopt more Joomla extensions in the future, and more WordPress plugins too.

This is an inteview with Damian Hickey, the founder of Jentla, which is a large-scale multi-site product for Joomla. The Jentla team are launching the product in the U.S. at this week’s CMS Expo in Chicago.

Jentla makes it really easy to develop and manage 1,000?s of Joomla websites. Many businesses have multiple websites but they can?t gain any advantages with Joomla until they are linked together under a centralized site manager. That?s what Jentla does. Adding, approving and publishing web content works just like offline where it flows through several responsible staff.? It?s possible to place the same piece of content on multiple sites saving huge amounts of time. Managing the administration of the sites is really easy too and operations like site upgrades and extension upgrades can all be done instantly across a very large group of sites. The Joomla CMS has a short learning curve but when you add Jentla to it, it becomes easier and significantly more robust. Jenlta is also the most ambitious extension to Joomla we?re aware of, providing the Joomla development community the opportunity to compete at the enterprise level.

END_OF_DOCUMENT_TOKEN_TO_BE_REPLACED

For the first time, we’re expanding the classes we offer at JoomlaTraining.com beyond just beginners classes. On April 22 in Miami, Rick Blalock is teaching a Joomla template design class. He’ll take you from a your basic HTML and CSS knowledge and using hand-on examples, he’ll show how to build a fully-fledged Joomla template. The class will also run on June 18th in Atlanta.

Rick is based in Miami and runs BeautyInDesign.com which was the first place on line to give people comprehensive tuition on how to build Joomla templates. He came to my attention several years ago with some groundbreaking templates including one that looked like a computer desktop and was the forerunner of many of today’s Mootools / drag-and-drop templates.

END_OF_DOCUMENT_TOKEN_TO_BE_REPLACED

Recently I found out that Barrie North from Joomlashack was running a university level course in Joomla. The class is “Web 2.0 Marketing with Joomla” and I asked Barrie more about this joomla foray into higher education:

1) How did the idea for a graduate level course come about?

I think Jen McKibben originally came up with the idea. I was speaking at the New England JUG about online communities and she thought a graduate course would be great (she is a program director at Marlboro Graduate Center). Its been a long time since I have been teaching in a classroom setting, so the idea appealed to me. I think that once you are a teacher, you’ll always have that desire to educate.

END_OF_DOCUMENT_TOKEN_TO_BE_REPLACED

Interview with Aaron Wall from SEOBook.com 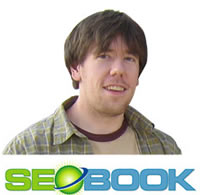 Today we’re delighted a have the chance to talk with Aaron Wall from SEOBook.com. Aaron’s SEO Book has been around since 2003 and he writes probably the best one-person SEO blog in the industry.

As we did here at Alledia, Aaron recently shifted his business model from pay-to-download-my-book towards a more community-based training system. His new site is built with Drupal, so we asked him about SEO and Content Management Systems:

END_OF_DOCUMENT_TOKEN_TO_BE_REPLACED

Interview with Yannick Gaultier from sh404SEF

Those of you who read this blog regularly know how highly I think of sh404SEF.

Those of you who don’t … its a great SEO tool, one of the most actively developed Joomla components available, costs $0, and has great support from its developer.

I’m delighted then to have the chance to talk with Yannick Gaultier whos runs the sh404SEF project.

END_OF_DOCUMENT_TOKEN_TO_BE_REPLACED

Interview with Ryan Demmer from Cellardoor.za.net

This week we’re publishing a series of interviews here at Alledia.com.

Every day this week we’ll be talking with a Joomla developer who works with a commercial GPL business model.

Our fifth and final interview of GPL week is with Ryan Demmer from Cellardoor.za.net.

END_OF_DOCUMENT_TOKEN_TO_BE_REPLACED

Interview with Achim Fischer from Joomster.com

This week we’re publishing a series of interviews here at Alledia.com.

Every day this week we’ll be talking with a Joomla developer who works with a commercial GPL business model.

Our fourth interview of GPL week is with Achim Fischer from joomster.com